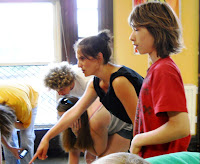 According to Manuel King, the program director and producer for the YouthReach! Summer Theater Ensemble, “Members of the cast have been working hard to develop an original drama which was recently titled, ‘Now and Then and Now Again.’ The play centers on a guided tour of the with stories narrated of events that happened in the castle during Humphrey’s reign in the middle ages.”
“The goal of the YouthReach! Summer Theater Ensemble is to provide teens the chance to explore their imaginations and creativity while learning about the craft of stage writing and acting. During four weeks of intensive work, they develop their own original play and then perform it publicly,” King explained.
Actors for the Athol Area YMCA’s Annual Summer Theater Program include Anastasia Anderholm, Aldan Clyatt, Naomi Cope, Jessica Funa, Tim Funa, Dominic Funa, John Hume, Quinton Illhardt, Andrew Illhardt, Paige Parsons, Ashley Reed and Nicole Savoy.  This year, Julian Fox and Cory Flood are serving as co- performance directors.
“Now and Then and Now Again” will be performed on Saturday, July 23 at 7:00 pm in the Ruth B. Smith Auditorium, Orange Town Hall at 6 Prospect Street, Orange, MA.  For further information, call Manuel King at Telephone # (978) 249-3305.
Story and Photo Credit:  Genevieve Fraser
Posted by G. Thomson Fraser at 11:37 PM